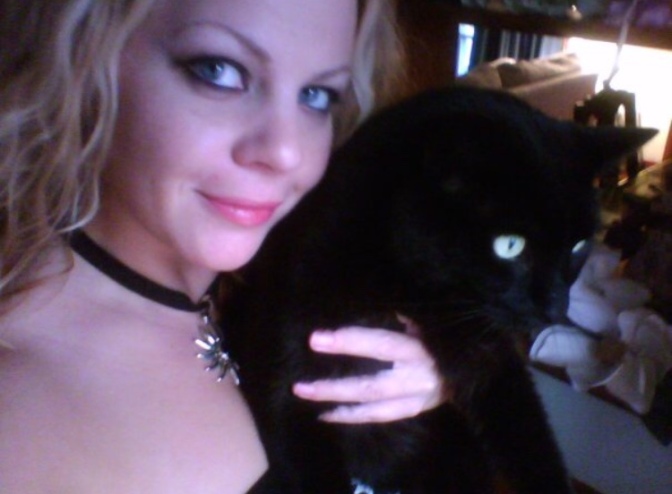 Twenty-one years ago at 20 years of age, I almost killed myself.
If it hadn’t been for a particular black cat, who recognized I was in turmoil
I’d be dead, and you’d not be reading this.

That’s how it was back then.
For me I was alone.
And then he came into my life.
It was a sad part of fate.
I didn’t want him.
In particular, I did not wish to own, another black cat.

My previous feline – who I was closer to
Than any other cat passed suddenly
It devastated me because we were soulmates
She cried by my door every day when I went off to college.
I couldn’t take her obviously since I was living in a dorm.

She had grown ill caused by eating a string that got wrapped around her
intestines and after 7 hours of surgery, she was gone.
She was a fighter, and Cola died three times on the operating table
coming back each time. Sadly, the last was her final, and my sweet black kitty, named Cola, by my niece was gone.

Fast forward three months later. I was at home deciding if I wanted to return to school or continue my move into the workforce when we received a phone call from our vet.

We still had one gray tabby at home, and while she had grown needy and lonely, I was in no hurry to replace my best friend.
The vet was wondering if for a small fee of 30 dollars if we would be interested in adopting one of their other adult cats in need of good homes.

I wasn’t interested, but my mom
Who could see my depression worsen over the loss of my favorite feline pal; said I should at least take a look.
So off to the vet we went.

I had given them specific instructions. No black cats
I wasn’t trying to replace Cola with a look alike.
So we went.
The first cat I met was an obese brown and black cat who showed no interest in me whatsoever.
The second was another fat cat who was gray and white with black
I considered her as well.
She had a lovely temperament, and just as I was telling my mom, I had found a friendly match, one of the nurses came in again.

“We have one more we’d like you to meet. He is black, but has white paws.”

I agreed and when I saw what they sent in
I wanted to laugh. There he was.
A tall, almost too tall, for a domestic cat,
He was Lar than any other cat I had ever encountered
He weighed 24 pounds of solid muscle.
Not an ounce of fat was on this cat.
His nose went down into an elongated point
His name, fittingly enough, was Panther.

He walked right over to me hopping up onto my lap rolling over on his back for me to rub his belly like a dog.
I knew then.
I was smitten.
I often joked he was probably a Leo
because he was so full of himself.

After one last full examination, he was ready to go home with us the next day.
As soon as he came into our house he took over and everything was his.
That everything included me.

He made friends with our female cat very quickly.
She never once hissed at him, and he was protective of her as well.
He made best friends with my dad who Panther curled up in the EZ chair and slept with him as though he had always been there.

We had heard he was a farm cat who had previously lived on a farm.
The lady of the house had him declawed, and he began urinating on everything.
So the man of the house had taken him to our veterinarian. Upon learning, he had a urinary infection; and the cost.
His response had been “I’ll just take him home and shoot him.”
That was how he came to be at my veterinarian and how he came into my life.

It wasn’t easy
At first, he wanted to roll around in his dirty litter box.
That was a hard habit to break.
He also buried things in our carpet like a dog and broke into the kitchen cupboards to eat bread and other things cats shouldn’t want to eat.
It was strange, but I chalked it up to neglect of the previous owner. We made sure his diet was better now that he was living with us.

He was two years old but could have been older.
He did random spraying which almost made my mother take him right back to our vet.
It was like he knew because he stopped.

I was still not used to him. He wasn’t tiny like Cola had been.
She was pretty and dainty, and he was massive and hard to hold.
I began to appreciate him more for his beauty less as a companion
He was more of a companion for my other cat Rajah.

Then it happened
I had a string of bad luck that winter
It began with a call my best friend had committed suicide.
I found out the day of calling hours, and two weeks later Cola passed away.

Then I got very sick.
I had caught the chicken pox at 20-Years- old.
I escaped hospitalization because I had stupidly lied to my parents and doctor about how badly I felt. I didn’t care to be in the hospital as
I had been in the hospital twice as a child, and both were traumatic experiences that I did not wish to revisit.

One thing I recall was my doctor warning me that if I had any trouble breathing to go to the emergency room.
I spent sleepless nights in aching pain.
I grew depressed and fat.
I could do nothing except feed on countless reruns of the Golden Girls and Designing Women.

One night I awoke to someone stroking my hair.
It was Panther. How odd.
He had decided to lay on my back, as would become one of his staples.
He’d lay on my back, as I slept on my stomach, and he’d kneed his claws that had no claws in my hair.
He was such a strange little healer.
Then one afternoon I was feeling particularly sad. It had all gotten to me at this point. I had spent weeks in bed feeling like I was never going to be myself ever again.
My friends had all abandoned me due to my illness; it was no fun to visit me in my condition.
I found myself balling my eyes out on a Thursday afternoon
My mom had to go to work for a few hours, and I was left alone and warned not to get out of bed.

I didn’t tell her I had begun feeling lightheaded, a sign that my disease had gone to my lungs.
At this point, I didn’t care if I lived or died.
I have never been so depressed before or after as I was at that moment.
Nor had I ever been so in love with the idea of ceasing to exist.
One thing I knew – if I stood up chances were I’d pass out and with no one home to revive me I’d be dead before my mother found me.

So I defiantly stood up next to my bed to walk out of my bedroom.
That’s when he came running around the corner jumping onto me forcing me to sit down.
He stayed on my lap.
I tried to make him get up, but every time I did he’d jump back up.
I had no choice but to stop resisting because this king of my house wasn’t letting me die.
Instead, I laughed
For the first time in weeks

I took a deep breath and then laid back down defeated.
I felt stupid, but he never left my side
From that moment we were inseparable

Even when I moved to Florida and couldn’t take him with me, he was just happy for me it seemed.
My friendly little guy there when I came home for visits
He was overjoyed when I moved back home two years later.

Less thrilled when I met my now husband.
He marked his territory on his Gucci suits.
Eventually, my husband won him over. It took a few years and many treats

Our bond was strong.
Six years ago he became very ill losing 3/4 of his body weight seemingly overnight.
The Veterinarian determined that additional tests could make it worse his skin just hung on his tiny body thinking he may break.
He was now 21 years old.

I took him every Saturday to my veterinarian for fluids and B12
Each week he asked me with empathetic eyes “Are you sure you don’t want to consider any other options?”

Each week he would put on weight so I remained hopeful he would recover.
By week six he lost more weight he was down to seven pounds.
I hated seeing him suffer, but I had to try.

Then by the next week, I had the strangest dream about my Panther.
I dreamt he was silver sitting on a picket fence glowing under a moon. He was happy and healthy again.

The next morning I knew I had to brace myself for what had to be done.
The guy had saved my life; I had to find now the courage to end his.

I called my mom, and we met at the veterinarian’s office.
I held my Panther, and I knew he didn’t want to go, but he was so sick, and his body was so tired.

I kissed him as he went to sleep. Then I felt his tiny soul leave his little body. His body is in a small grave with lavender plants growing over it on my friends land. She has her little pet cemetery, and now it is where my Panther rests.

It will be six years this May. I’m still not over it.
That’s the way it is when you bond with an animal. They become such a large part of your life. I have had other cats since all with equally unique personalities, none quite like Panther.

I don’t think I’ll ever meet another creature quite like him. He has inspired a few of my stories one in particular called The Black Cat

4 thoughts on “How a Black Cat Saved my Life”