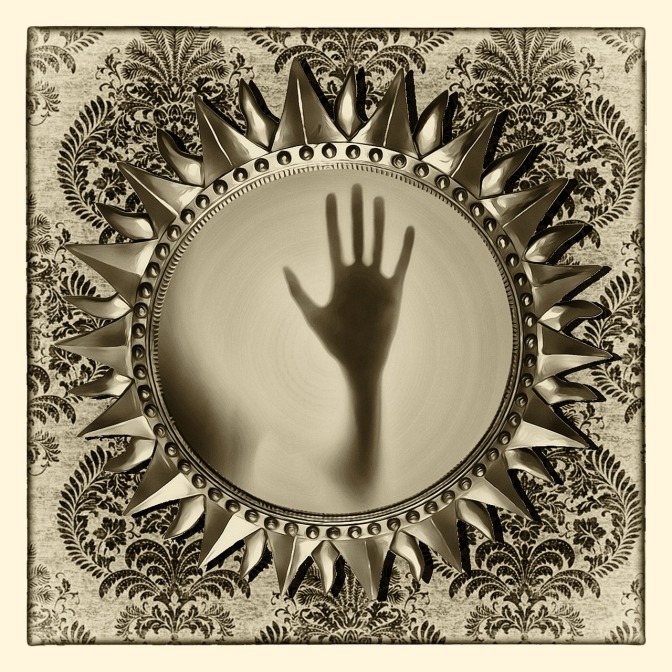 There is a wonderful book by J. Edward Cornelius entitled Aleister Crowley and the Ouija Board where he discusses the proper use extensively with the spirit board.

A lot of what J. Edward Cornelius discusses is the magical properties of conjuring spirits, but he goes into depth and discusses Aleister Crowley’s belief that you should concentrate on communication with only one entity. That the first time you go to use a spirit board, it be with the same preparation that goes into birthing a child.

He discusses observing when the stars align, and if the sign is compatible with your own, then it will be a positive union. It is also never clear if what you are communicating with is a spirit, elemental, or alien.

It is safe to say I did not go into any such preparation that morning in March 2002 when I picked up the board. I was utterly unprepared for what was about to happen.

Let me go back to where I left off.

YES
Never was such a simple word so important to me at that moment.

I will never forget that feeling of knowing I had no control over it, and it moved. It was alive!

I sat for what seemed forever until the tears came. I never expected to cry using a Ouija Board. Still, here I was balling my eyes out over the fact that this was no fairytale. This was no scary movie; this was my real life.

When I composed myself, I sat for a long while trying to think of the next question. My only utterance was “Thank You.”

I sat for a long while trying to think of an intelligent question. My immediate thoughts were asking to talk to my grandma or someone like my favorite uncle that I had been very close to as a child. Instead, the only thing I could think of was, “Are you of the light or the dark?”

The planchette did not move, and then I felt it slowly move towards the center of the board. I realized that I should probably stick to Yes or No questions. I was not good enough to have it spell out things quickly like my friend, Annette.

It went very slowly and crept towards the YES.

I asked the next question, “Did I know you in life?”

It crept very slowly to the word NO.

At first, I was a bit disappointed, but then I thought better it isn’t so when I ask more embarrassing questions I am not picturing my late grandma as the one responding.

It slowly circled the NO.

Can you spell out your name?

N-O-M-E it spelled but I wasn’t sure if it was serious or saying No Name.

It went very slowly toward the word YES.

I smiled. “Do you want to be my friend?” I asked thinking of what my friend Annette had suggested me asking.

It moved very quickly again to the word YES.

By now I was in full bewilderment and still unsure as to what the hell all this meant. I did not care. It was like discovering I had a superpower. I now realized I could talk to the dead. I didn’t even need a medium.
To anyone reading this, this will sound very odd, to anyone that has never used a spirit board. I will tell you there are still moments I feel like maybe I imagined all of this. The evidence lies there were witnesses to what happened to me.

I recall spending most of the morning asking things about the guy we will call “Ryan” to protect his identity.

My sister arrived after eleven am to hang out with me as she was only working a half day.

I recall her looking at me when I told her that I had been able to use the Ouija Board. She looked at me strangely for a moment.

“Did Annette come over?”

“Because you said you were using the Ouija Board.”

“I used it by myself. I just picked it up and started asking questions.”

My sister looked at me, wide-eyed and laughed. “Of course, you did. You are so weird.” She laughed. “So, did it tell you anything good? Am I going to keep my job?”

I shook my head. “Sis I wasn’t thinking of you when I was using it.”

That is when we had a good laugh. By now, my niece and nephew were playing outside in the hot Florida sun. My niece and I laid out in our bathing suits in the driveway, and I tried hard not to think about my new obsession, the Ouija Board.

You see some people claim they have been possessed after using a Ouija Board. However, some people are on the other end of it, obsession.

I had slowly become slightly obsessed with the thing. It was one major thing that did it. I had asked the board if Ryan would ever call me.

YES, it had said.

By now, I was slowly spelling out words and understanding what they were trying to say before I had a chance to complete the spelling on the board. I can’t explain this process to anyone who has never done it. I guess you would compare it to when Google finishes your sentences in the search engine.

I asked when Ryan would call me and it spelled Wednesday.

I forgot about it as I was unable to use the board for a couple of days. My sister had started a job as a manager at a night club during this time, which was another reason I had come to Florida. I was helping during the process of her switching jobs, but my old boss who now owned the club wanted me to help get the place started by selling tickets at the box office for the concerts and helping my sister decorate the women’s sitting room. In truth, my sister wanted my opinion on her new job and the new people she was going to be working with there. She always relied on my opinion and always said I had a good judge of character, so she needed me like a security blanket.

I recall walking into the old club, which coincidentally was rumored to be haunted.

There were so many synchronicities during this time that it was like rushing inside a wind tunnel where so many things are happening all around you, and when it is over, you need a day or a few years in my case to comprehend what took place.

I was listening to the radio outside in a patio chair working on my tan when I finally heard the phone ring. It was my father telling me I had received a call from “Ryan” who seemed mildly distressed and needed me to call him over a voicemail.

You see Ryan worked at the bank I held my account with. I called the bank, but my father was worried and called them on my behalf to explain after listening to the voicemail that I was out of town but would have me call them.

I was so embarrassed. Why did my parents have to be so overprotective of me? By the time I called the bank back another teller had answered and when I gave my name and that Ryan had contacted me and I wasn’t sure if something was wrong because my account wasn’t overdrawn or anything.
He was not able to come to the phone. The only thing he said was that he was completing a customer “check.” I did not have a clue what that meant and to be honest, I am not entirely sure why such a big deal was made over it. Then I thought about it; it was Wednesday. Ryan had called me as it said.

I excitedly stole time and ran into my bedroom and pulled out the board. I asked why Ryan called was it because of a customer check?

YES, it had said.

I was mildly disappointed. I was hoping Ryan had called because he liked me as much as I liked him. Then it said something else that made me a little concerned.

HE HAD BAD DREAM YOU DIED. It spelled it out, and then I put the board down and called my friend Annette.

“You ready for that tea leaf reading now?” was her only response to what I told her.

“I know you have questions come over around one tomorrow the boys will still be in school, and my husband will be at work.”

I hung up and then tried with everything inside of me not to get overly excited. Ryan had called just like they said.

This was the period I entered my obsession. 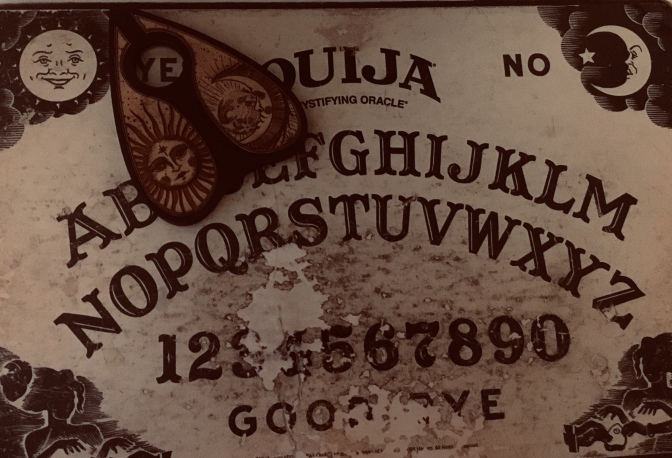 Photo of my actual Ouija Board the faded letters are from what I refer to as my scars, or the period of my obsession with its use.